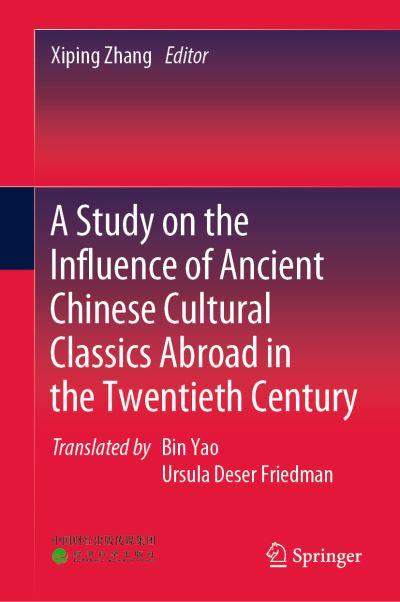 Congratulations to Ph.D. student, Ursula Friedman for publishing her new co-translated book, A Study on the Influence of Ancient Chinese Cultural Classics Abroad in the Twentieth Century, Springer, Singapore 2022.

This book presents an extensive literary survey of the influence of ancient Chinese cultural classics around the globe, highlighting a mammoth research project involving over forty countries or regions and more than twenty languages. As the book reveals, ancient Chinese culture was introduced to East Asian countries or regions very early on; furthermore, after the late Ming Dynasty, Chinese “knowhow” and ideas increasingly made inroads into the West. In particular, the translation of and research on Chinese classics around the world have enabled Chinese culture to take root and blossom on an unprecedented scale.

In addition to offering a valuable resource for readers interested in culture, the social sciences, and philosophy, the book blazes new trails for the study of ancient Chinese culture.

Ursula Deser Friedman (Translator) is currently pursuing a Ph.D. in East Asian Languages and Cultural Studies, with an emphasis in Translation Studies, at the University of California, Santa Barbara. Ursula holds an M.A. in Foreign Linguistics and Applied Linguistics with specializations in Translation and Conference Interpretation from Beijing Foreign Studies University, where she has taught Mandarin-English Translation since 2017. Ursula’s publications have appeared in Translation Review, International Communications and Modern Chinese Literature and Culture.