Students in this specialization may deal with one of its three areas or combine more than one. Literary studies include diverse forms of expression (poetic, dramatic, narrative, critical) from the premodern, early modern, modern, and contemporary periods, both as they are rooted in particular contexts and traditions and as they circulate across national and regional boundaries. Topics include literary and cultural theory, aesthetics, reception, discourse, gender, society, and the intersection of literature with visual culture, film, book history, and performance. 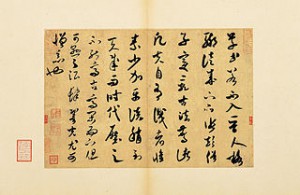 Linguistics focuses primarily on Chinese, including both diachronic and synchronic approaches to materials ranging from early Buddhist texts to literary texts from the Ming-Qing period up to the present; topics include the impact of cultural contact and social and economic factors on language development. A second focus on language pedagogy covers language teaching theories and methodologies, with special emphasis on pragmatics and the cultural elements embodied in language.

Translation studies is broadly defined to encompass discourse about translation, both new and old, theoretical and historical, as it relates to translations within East Asia, into East Asia, and out of East Asia. The focus is principally on literary translation.