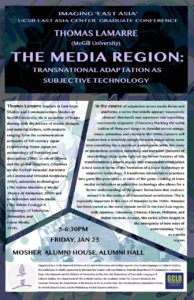 In the course of adaptation across media forms and platforms, a series that initially appears ‘excessively obvious’ (Bordwell) may transform into something ‘excessively enigmatic’ (Elsaesser). Tracking the serialization of Hana yori dango or Hanadan across manga, music, animation, and cinema in the 1990s, Lamarre will explore how a relatively straightforward manga series turns into something like a puzzle or a mind game. While the study of production (creative industries) and narration (patterns of storytelling) sheds some light on the formal features of this transformation, Lamarre argues that the transmedial serialization is best seen in terms of the formation of a social technology or subjective technology. It transforms interpretive practices into game-like procedures, or rules of the game. Looking at trans-medial serialization as subjective technology also allows for a better understanding of the power formations that coalesce around it in the context of transnational serialization. This is especially important in the case of Hanadan in the 2000s. Hanadan has been touted as the most remade series in the East Asia region, with Japanese, Taiwanese, Chinese, Korean, Philippine, and Indian versions. As such, this series offers insights in the emergence of new ways of understanding “Asia” as a media region.