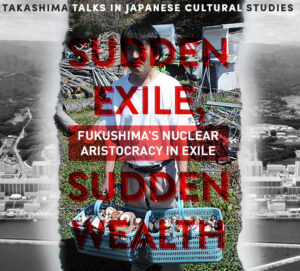 Radiation from the Fukushima nuclear disaster of 2011 broke up local communities by forcing their inhabitants into exile in locations scattered though the prefecture.  In subsequent years, government compensation policy created further divisions within these ruptured communities, by providing wildly varying amounts of compensation according to the classification of danger in each district.  The most handsomely compensated were those in the “hard-to-return-zones” where many households received the equivalent of US $1 million dollars or more.  They have been cursed with the loss of their homeland and the lingering fear of radiation health risks, blessed with sudden wealth, then cursed again with “envy discrimination” by those less well compensated.

TOM GILL is a British social anthropologist and professor in the Faculty of International Studies at Meiji Gakuin University, Yokohama, Japan.  He is author of two books about Japanese casual laborers, Men of Uncertainty (2011) and Yokohama Street Life (2015).  Since April 2011 he has been following the fortunes of the inhabitants of Nagadoro, a hamlet which to this days remains closed for habitation due to the Fukushima nuclear disaster.