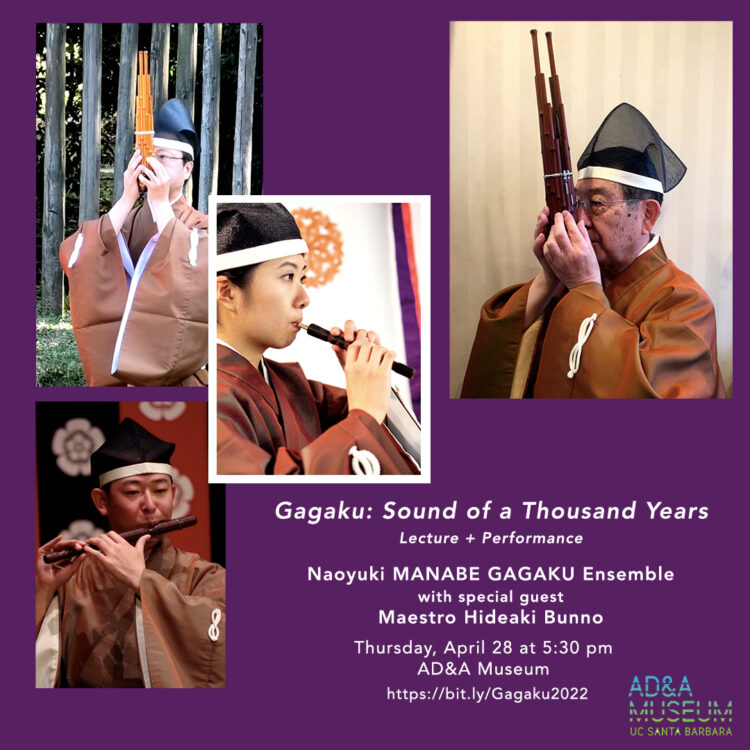 The Gagaku orchestra at the Imperial Palace of Japan was established in 701; its music is recognized by the government of Japan as a national intangible cultural property, and by UNESCO as part of the intangible cultural heritage of humanity.  The most ancient and continuously performed orchestral tradition in the world, Gagaku is exceptional in its combination of an archaic allure with unexpected contemporary features (free rhythms, complex sound clusters, controlled dissonance). In addition to the imperial court of Japan, Gagaku is also regularly performed at Buddhist temples and Shinto shrines in Japan as part of their respective liturgies.

In this lecture / performance, the musicians will demonstrate the sounds and techniques of their respective instruments and offer the audience a unique perspective on the appreciation of the millenarian world of Gagaku.  This event is organized by Fabio Rambelli (University of California, Santa Barbara) with Naoyuki Manabe, in collaboration with the Art, Design & Architecture Museum at UC Santa Barbara. Generous support is provided by the International Shinto Foundation Endowed Chair in Shinto Studies, UCSB; Robert N.H. Ho Foundation; and Michael Hurley/Manitou Fund.