Gagaku: Music of the Imperial Ceremonies of Japan One Thousand Years of Elegance and Harmony 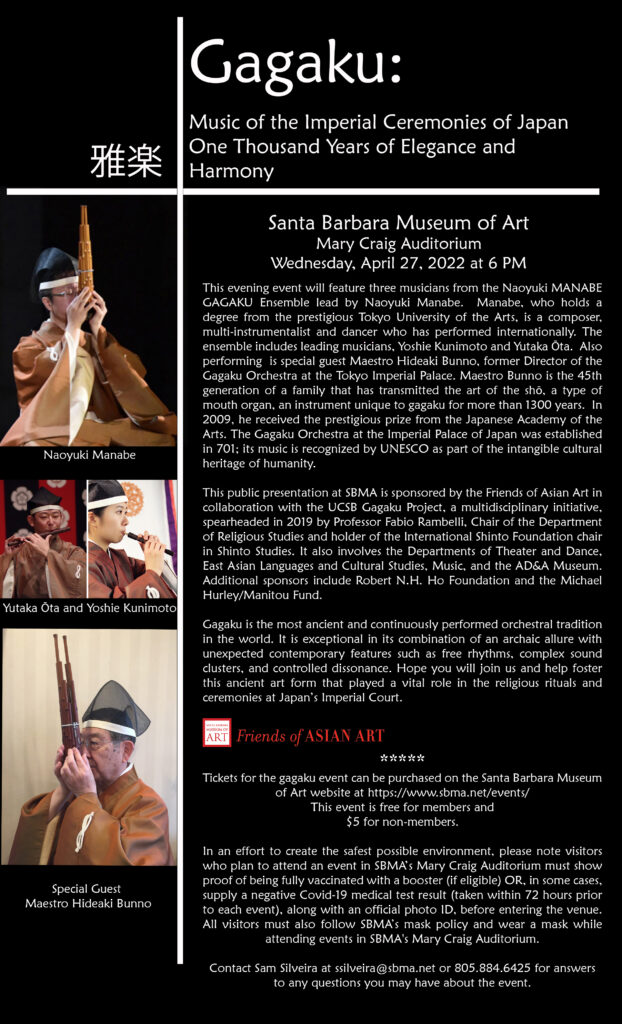 This evening event will feature three musicians from the Naoyuki MANABE GAGAKU Ensemble led by Naoyuki Manabe. Manabe, who holds a degree from the prestigious Tokyo University of the Arts, is a composer, multi-instrumentalist and dancer who has performed internationally. The ensemble includes leading musicians, Yoshie Kunimoto and Yutaka Ota. Also performing is special guest Maestro Hideaki Bunno, former Director of the Gagaku Orchestra at the Tokyo Imperial Palace. Maestro Bunno is the 45th generation of a family that has transmitted the art of the sho, a type of mouth organ, an instrument unique to gagaku for more than 1300 years. In 2009, he received the prestigious prize from the Japanese Academy of the Arts. The Gagaku Orchestra at the Imperial Palace of Japan was established in 701; its music is recognized by UNESCO as part of the intangible cultural heritage of humanity.

Tickets for the gagaku event can be purchased on the Santa Barbara Museum of Art website at https://www.sbma.net/events/  This event is free for members and $5 for non-members.