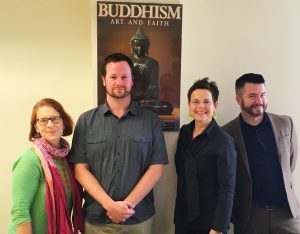 Carl at his prospectus defense with his committee

EALCS Ph.D. candidate Carl Gabrielson has been awarded a Japan Foundation Japanese Studies Dissertation Fellowship for 2018-2019. Carl will spend one year in Japan conducting ethnographic research on and around U.S. military bases. His research focuses on interpersonal relations between Japanese people and the Americans from the bases, as well as the overlapping spaces of the bases and their surrounding communities. He argues that these relationships and spaces create channels for both intentional and unintentional forms of militarization and surveillance to affect the everyday lives of both groups. Carl will be based out of Meio University in Nago, Okinawa, where we will be hosted by University President Yamazato Katsunori.