March 11, 2022Announcement, In The News, Japanese Program, People in the Department 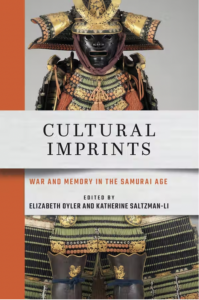 Congratulations to Professor Kate Saltzman-Li on her new co-edited volume, Cultural Imprints:  War And Memory In The Samurai Age!

Cultural Imprints draws on literary works, artifacts, performing arts, and documents that were created by or about the samurai to examine individual “imprints,” traces holding specifically grounded historical meanings that persist through time. The contributors to this interdisciplinary volume assess those imprints for what they can suggest about how thinkers, writers, artists, performers, and samurai themselves viewed warfare and its lingering impact at various points during the “samurai age,” the long period from the establishment of the first shogunate in the twelfth century through the fall of the Tokugawa in 1868.

The range of methodologies and materials discussed in Cultural Imprints challenges a uniform notion of warrior activity and sensibilities, breaking down an ahistorical, monolithic image of the samurai that developed late in the samurai age and that persists today. Highlighting the memory of warfare and its centrality in the cultural realm, Cultural Imprints demonstrates the warrior’s far-reaching, enduring, and varied cultural influence across centuries of Japanese history.