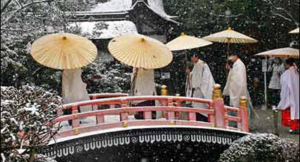 In addition to language training, this major focuses on the humanities, setting them within a broad social and historical context. For courses associated with this major, see the Catalog. The Japanese major is more geographically and culturally specific than the Asian Studies major, and it requires considerably more advanced language training in Japanese. Students should examine the different majors to determine which best suits their objectives.

Students are encouraged to complete an academic year of study abroad through the university’s Education Abroad Program in Japan. For certain EAP programs, students can go abroad after two quarters of a language.