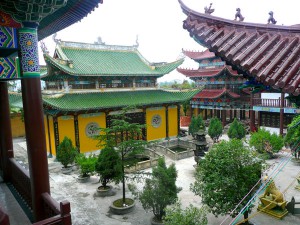 The astounding economic growth of China means that this ancient culture and dynamic modern society will have an important role in the future of global affairs. Yet few American college students have ventured to learn more about this fast-moving area. What better way to prepare yourself for a career in journalism, tourism, government and international relations, international law, transnational media productions, environmental activism, international business, museum work, or artistic exchanges than immersing yourself in the history, art and literature, culture, media, and society of China and the Chinese-speaking world?

The Chinese Major at UCSB will provide you with a thorough grounding in the diversity of Chinese culture and traditions from imperial to modern times. The Chinese language you will learn is the best way to convince your future employers that you stand out from other college graduates who have never learned the language and that you have an inside view of the culture. Being able to read Chinese will keep you abreast of Chinese current events and social attitudes through the online and print world.

What kinds of classes can a Chinese Studies major expect to take?

We have classes on a diversity of interests, from poetry, linguistics, classical fiction, women’s literature, modern literature, to modern cinema, to modern history, to Daoism and Buddhism from medieval to modern times, to religion and politics in modernity, and Anthropology of China. We even offer Business Chinese.

Students may wish to consider a double-major in Chinese Studies and another disciplinary field in the Humanities, Social Sciences, Economics, or even Engineering and Natural Sciences.

How Can I Tell If I Would Like Chinese?

Do you like learning languages? Do you have a particular interest in China, or in East Asia more broadly? Do you like martial arts movies? Do you like reading classic literary works and watching great movies? Are you curious about Buddhism, Daoism, or Confucianism? Are you interested in learning more about Chinese history, society, and culture? If so, you will benefit from being a Chinese major.

Even if you don’t yet have a special interest in Chinese culture, being a Chinese major will be very valuable if you think you might one day want to work in a field that requires knowledge of languages, or even just an awareness of and sensitivity to cross-cultural issues.

What can a student do with a Chinese Major upon Graduation?

American corporations in manufacturing, trade, media industries, information technologies, tourism, as well as alternative energy and green industries increasingly have business in China. Major corporations have branch offices there. These will all require employees who know the language and culture. Not only the Federal Government, but also American local and state governments have the need for researchers, cultural ambassadors, legal experts, and educators who understand China and the Chinese language. As Chinese businesses increasingly go global, they will have the need for American natives who can help them understand American culture, business practices, and legal systems, as well as help them in reaching out to the English-speaking world. The Chinese educational system is keen on upgrading the level of English competency at all levels of education, and many Westerners find work in China introducing Western culture, but discover that they need to know Chinese. Many Western and international NGO’s also now operate in China, involved in environmental relief efforts, poverty relief, AIDS relief, and human rights efforts.

Some Chinese Majors may wish to go on to graduate school to obtain a professional degree, such as a journalism degree, a law degree, or Masters of Business Administration. Others may have an academic orientation and may wish to pursue a Ph.D. degree in History, Literature, Religious Studies, Film Studies, Anthropology, and so forth, specializing in China, and preparing for a career as a university professor or research scholar.