Why Major in Asian Studies? 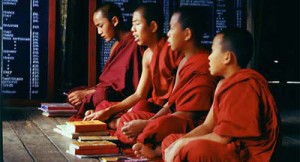 Asia is now one of the global powerhouses, not only in terms of economic output, but also and especially because of its rich cultural production, numerous political issues, and challenges for future that will affect more or less directly all of us.

This situation is not new. The most widespread world religions all originated somewhere in Asia, and Asian countries have been the places of complex and sophisticated cultures and hubs of economic production and trade. We keep hearing about trade unbalance between western countries and Asia, well, it was already like that at the time of the Roman Empire…

Asian Studies majors graduate from UCSB with a competence in the most important Asian languages (Chinese, Japanese, Tibetan, and Hindi), but also, and importantly, an interdisciplinary knowledge of various fields relating to Asia: literature, film, art, history, anthropology, religious studies, politics and economics. Students also acquire a comparative context for their understanding of Asia in its relations with the US and other parts of the world.

What Will I Study As an Asian Studies Major?

Asian Studies majors have a wide variety of courses available to them, and the major is structured to allow students to focus on the issues and fields that most interest them. All majors are required to take at least two years of modern Chinese, Japanese, or another Asian language taught at UCSB (they include Tibetan, Hindi, and Sanskrit) and two courses introducing East Asian history and culture. Electives include courses on anthropology, history, literature, cinema, and religious studies — all related to important aspects of Asian cultures.

How Can I Tell If I Would Like Asian Studies?

Do you like learning foreign languages? Do you have a particular interest in Asia in general and more specifically in China, Japan, India, or Tibet? Do you like manga and anime? Would you like to discover classic literary works and watching great movies from Asia? Are you interested in learning more about various aspects of Asian countries’ history, society, and culture? Have you ever though of exploring the worlds of Buddhism, Hinduism, Daoism, and Confucianism? If so, you will certainly enjoy being an Asian Studies major.

Even if you don’t yet have a special interest in specific aspects of the rich cultures of Asian, being an Asian Studies major will be very valuable if you think you might one day want to work in a field that requires knowledge of languages, or even just an awareness of and sensitivity to cross-cultural issues.

What Kind of Jobs Can I Get With an Asian Studies Major?

Because the Asian Studies major is so flexible, and because Asia is globally important in so many areas, you will find it useful in all kinds of different fields, including global business, education, government, the arts, media, foreign service, game design, international relations, travel and tourism, social services, the service industry, academia, technology, and international law.

You will also find that it is fairly easy to make Asian Studies part of a double major. Having a strong liberal arts background, or training in the social sciences or hard sciences, makes Asian Studies majors even more appealing as candidates when the time comes to apply for jobs.